How We Didn’t Go on a Motorbike Trip Across Cambodia 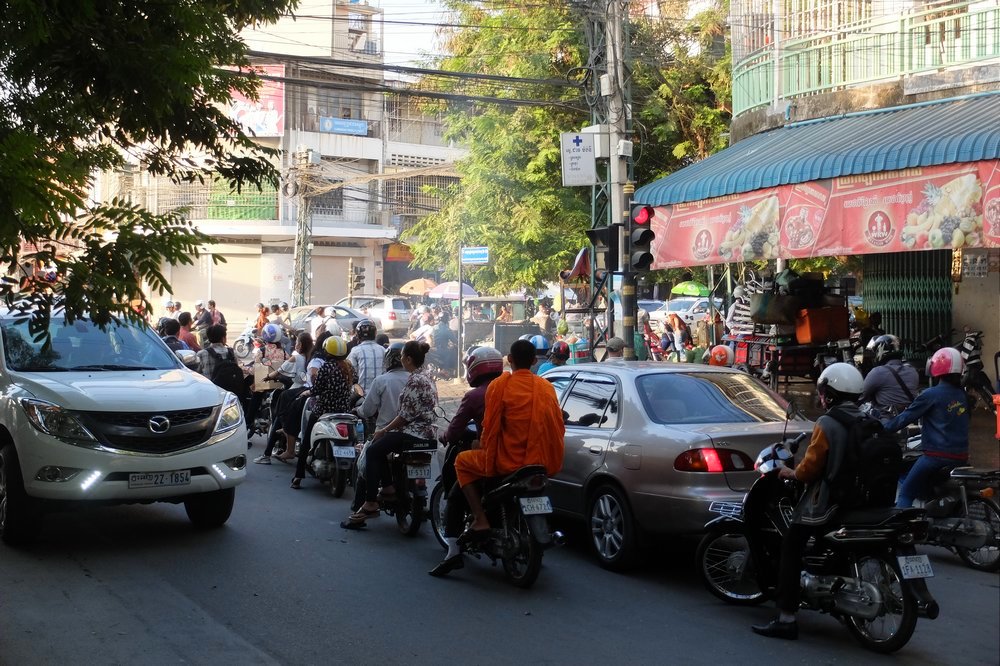 This article may contain compensated links. Learn more in our disclaimer.

[dropcap]A[/dropcap]t first we had no thoughts about traveling across Cambodia by motorbike. But then we learned, that it’s the same as easy to get a bike here like in any other South Asian country, and since January 2016 in Cambodia you don’t even need a drivers license for a small bike (125cc or less), and our initial plan changed.

On our second day in Phnom Penh, capital of Cambodia, we knew – we will buy a motorbike, travel with it across Cambodia for some 3 weeks, and then we will sell it.

Why to buy when you can rent? In Cambodia, at least in Phnom Penh, in most of the places, when you rent a motorbike, they ask for your passport as a deposit. And it’s quite tricky. But for us it wasn’t even an option because we wanted to apply for Russian visa. And you can’t apply for visa without a passport.

Buying a Motorbike in Cambodia

Buying a motorbike in Cambodia turned out to be very easy.

There are several “Buy & Sell” Facebook groups. For example, Phnom Penh Buy and Sell or BUY and SELL Cambodia. And there you can sell and buy almost everything. And you can buy a bike there.

Owner of the bike was a nice guy, who, as it turned out, was living in a guest house just next to ours. We don’t know much about motorbikes. Ok, we don’t know anything about them. But we looked at it. Took it for a test drive. Drove around few blocks. Everything seemed OK. So I handed over 290$, received a registration card and key, and at the same moment became owner of my first motorbike.

As we didn’t have helmets we postponed our first ride through the traffic madness of Phnom Penh until the next day.

To be honest, I find traffic in Phom Penh OK. I don’t have much experience with it. But as the average speed here is more like 40 km/h or less and people are calm it’s not that bad as it looks at first. 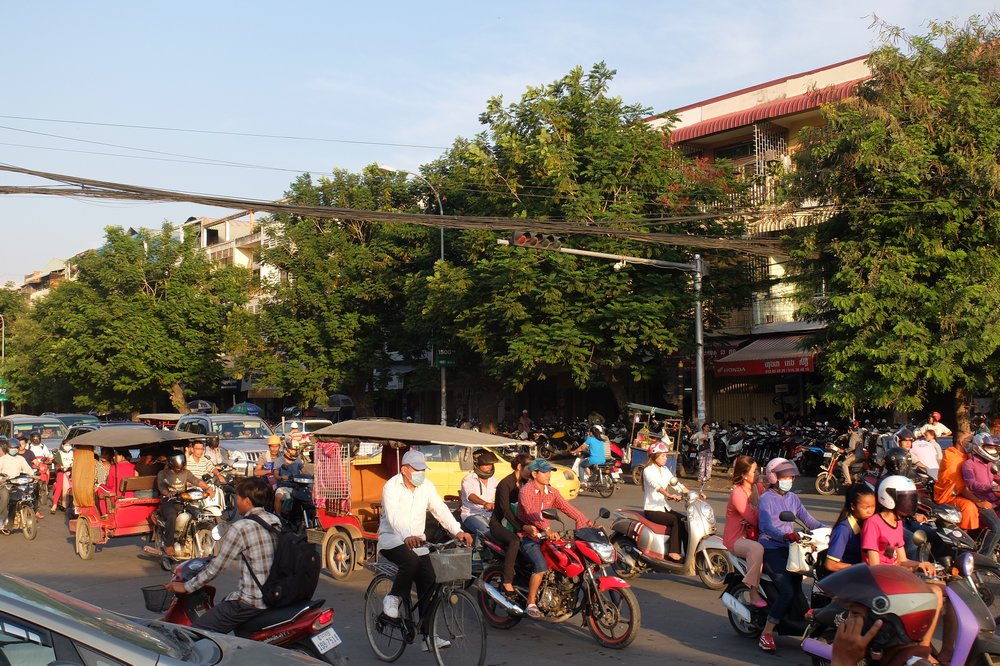 Late in the night we went on a small test ride around nearby area. And after few blocks I actually understood, that driving with it isn’t too much different from driving with a fully automatic motorbike. Previously in India, Malaysia and Thailand we had driven with automatic scooters only, and this one was our first semi automatic bike.

Next day was busy for us. So we went out only late in the afternoon. We wanted to drive a little bit further this time. But we still didn’t have helmets. But as we were walking out guys from the next guest house approached us and asked if they can help us.

– Can you give me 2 helmets for one day? Tomorrow we will get our own.

Less than 5 minutes later we were on a busy road, in a real evening traffic of Phnom Penh, where everyone and everything is going in all directions. Comparing to how I felt just a day ago driving seemed way easier. I felt confident on our new bike. We drove past one block. Next block. And another one. Few minutes later we already reached the supermarket, where we were heading. As things were going this good we decided to make it a longer ride and drive around at least a few more blocks.

We continued. Until… a man on a motorbike went out in our way and I needed to brake fast. I squeezed the brake lever, bike slipped and we almost fell. And only then did I realize, that these were front brakes. My mistake – I was too used to our previous bikes in Malaysia. And so I forgot, that with this bike to brake you need to use a pedal.

But then I also understood, that this bike doesn’t fit me well. Because I can’t press this rear brake pedal. Not without a longer training for sure. I had no chance to think about it too much, as we crashed in a car few hundred meters later. BOOM!

Now thinking about it seems stupid that it happened – because I saw a car and I was driving slowly. Car stopped before turning on the road, where we were driving. And I decided to go on. But as I started to accelerate car started to drive, too. And I didn’t manage to brake fast enough.

Somehow we fell on the left side. Luckily for us. As neither we were hurt, I just slightly hit my knee, nor a car had a serious damage. Anyway, the feeling, when you are on a tarmac with your bike right next to you and there is shiny white car, which you just crashed in, isn’t the best one. It doesn’t become any better when you realize, that it’s a one way road and you were driving in the opposite direction.

Then it doesn’t matter, that there are plenty of others going exactly the same way like you.

I picked up a bike. Driver went out of the car to look at the damage. Shortly later he pointed to us to go the side of the road. We pushed our bike on the sidewalk, and waited for a driver to turn around and park his car. Then we looked at the damage together. Bumper was slightly bent and scratched. These were some really uncomfortable minutes. Absolutely calm, though, as there was no any signs of anger or annoyance in the face of the driver.

What made it harder for us was that we had no idea, how these kind of situations are being solved in Cambodia.

Driver asked if I’m OK to pay for this damage. Of course, I was. Because it was my fault. Only I was worried, that it might be quite costly. He didn’t know, how much it costs, and that’s why he called someone. 60$ was what he asked.

But it wasn’t a problem. Driver took us to the hotel. He helped us to find an ATM. And he refused to take more money. I wanted to give him 70$ instead of 60$, but he took only 60$, because, as he said, he knows, we didn’t do it on a purpose. At the end he took us back to our motorbike, and waited until we check if everything is fine and if we can drive with it. 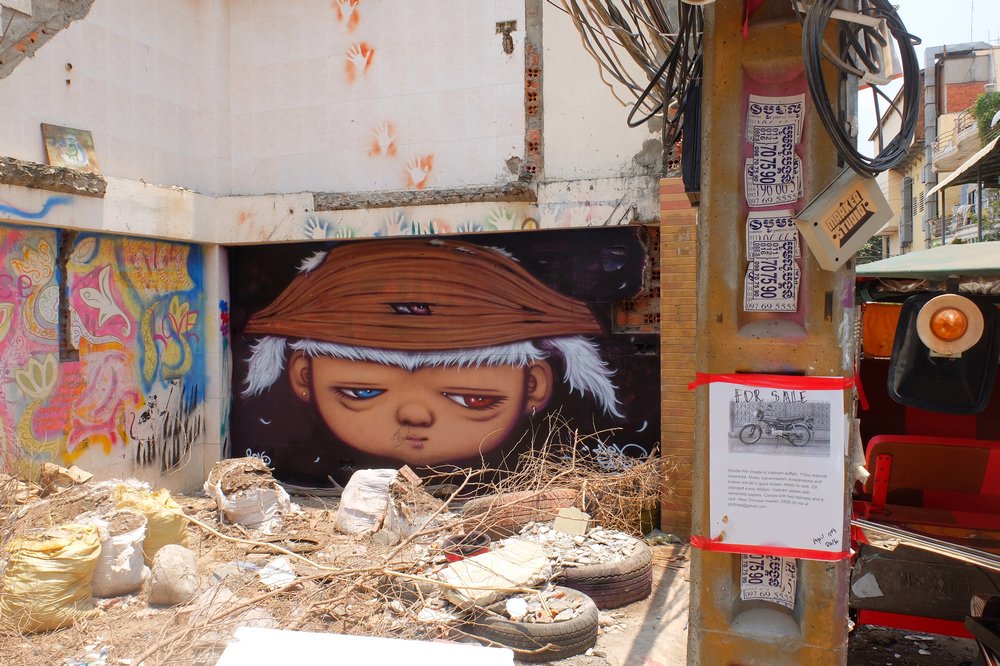 Two days later we sold a motorbike for a slightly lower price.

We decided to travel across Cambodia by bus.